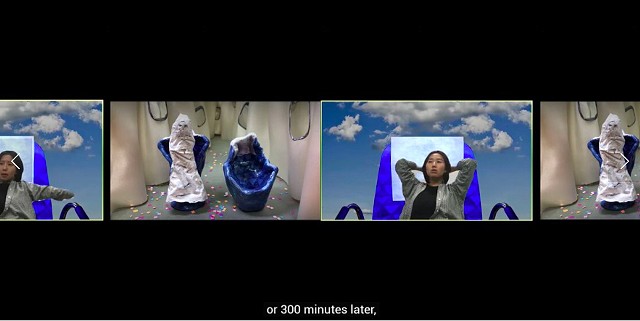 Could anything be more quarantinesque than a 23-minute livestream performance on Zoom? Art emerging in difficult times—exile, war, illness, pandemic—often comes formatted in ways reflective of the maker’s situation. So it is in the recent case of “Turbulence and the White Girl,” directed by Dasul Kim. The titular turbulence is aeronautical, the girl a woman sheathed in white from head to toe. Her spectacular whiteness is analyzed for its relationship to power and geography but also, insightfully, for its ghostliness, its neutrality, its nothingness. White is never just white. The scenario arrives via two Zoom windows, one featuring a naïf diorama of a plane interior occupied by a little white puppet, who acts out the strange, dreamlike occurrences recounted by the actor Eun Ho Park, narrating from a second window while posed against a giant airline seat background. The total effect, swayed by almost unbearably intense music, veers from dreamlike to nightmarish, much like life these days.