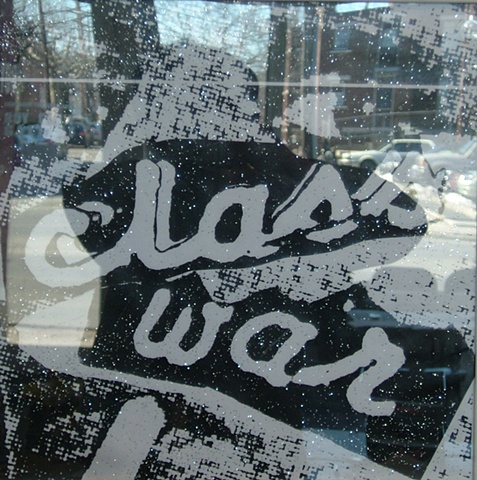 Glitter and Xerox make an odd couple at first but not second glance. In James Payne’s Money Isn’t the Everything that Not Having It Is, 2009, conceptual and formal parallels abound between the two decidedly plebian mediums. Glitter, after all, is nothing if not cheap, accessible glamour. Xerox, after all, is nothing if not cheap, accessible printing. Money isn’t the anything of either of them, and in case the viewer doesn’t quite cotton to thinking about content through material, Payne provides the classic expression, “class war,” right smack in the middle of his print. Class party might have been a more apt turn of phrase, however, given the glitter and the Sex Pistols-esque aesthetic of collaged, black-and-white copied text. And what a party it is, down to the correspondence between rectangular pieces of silver glitter and the image fragmentation that results from blowing any image up over and over again on a photostat machine. It’s a getting at the heart of the matter old school style, not with digital pixilation but the flash of the copier. But why blow things up? To look closer at it, hoping that what gets lost in the expansion and repetition is replaced by revelation. If not, there’s always the pretty flash of glitter to make the emptiness of truisms ring anew.