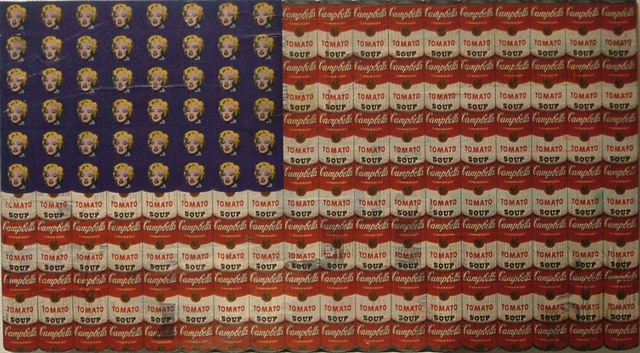 Charles Ives is something of a trickster. He fashions himself as a pop artist for today, borrowing imagery and ideas from, in order of appearance, Robert Rauschenberg (who invented the combine, a sculptural form of detritus collage), Jasper Johns (who reinvented the American flag as grounds for theme and variation), and Andy Warhol (who updated the icon to encompass celebrity and consumer culture), among others. His "Ventriloquist’s Ready-Made Combine" pictures an American flag with the stripes courtesy cans of Campbell’s Tomato Soup and the stars courtesy Marilyn Monroe; "Combo-Meal" does likewise with Marlboro cartons and Ronald McDonald. Kudos, Mr. Ives, for repackaging the vanguard art of 1955-1964 with goods that were relevant then and, amazingly, still are today. Kudos, too, for having a sharp enough eye to make smart-looking collage. But what, in the end, is the point? Or rather, what is the point of Charles Ives (or whoever he is)? What he seems to be suggesting, and sort of celebrating, is the rather cynical worldview that can’t see anything except as derivative of something else. This is something that Warhol intuited but Rauschenberg and Johns, for all that they reused and reimagined, never did. But they were never really pop artists anyway. Thank goodness for that.