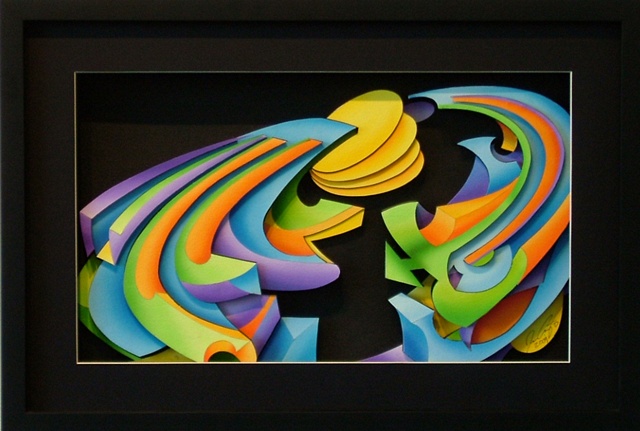 From amid the eye-popping technicolor whirlwind of swirls and swooshes, platforms and plateaus that constitute the stuff of Jason Amatangelo’s bas-reliefs comes a cry not heard in years: Duck Dodgers in the 24½th Century! Or so it seems to me, child as I am of Warner Bros. cartoons. Abstract they may be, but Amatangelo’s forms and figures constitute a world, and worlds are inevitably peopled, even if those people aren’t visible at first sight. Perhaps it’s because the artist’s low reliefs, created from acrylic paint airbrushed to paper and stuck onto cut-out foam core shapes, creates a space simultaneously two- and three-dimensional, an analog to the hand-drawn cartoons of yesteryear, where giddy motion was conveyed through bright color and jazzy forms. Even Amatangelo’s grayscale pieces have this cartoony effect, as if a full-color animation were being seen on the screen of a black-and-white television. Duck Dodgers it is for me — something, or someone, else no doubt calls out to other viewers.