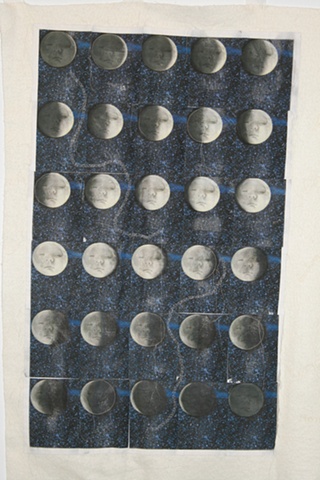 Meditation forms a central part of Buddhist religious practice, but there’s no need to be an adherent in order to understand and benefit from a sense of one’s own impermanence and the cyclical nature of life, not to mention focused breathing. Printmaker Laura Isaac has created a series of works which endeavor to both represent and encourage these notions and practices. Using a combination of traditional and contemporary techniques that range from the handcrafted to the digital, she offers viewers symbolic representations of such aspirational notions as joyful life. This last finds itself illustrated by a pair of dancing skeletons, traditional Tibetan deities that beautifully signify just that, whether one is familiar with the tradition or not. A series of prayer flags do the same for peaceful breathing, embodying that action through printed lungs whose bronchi resemble the branches of trees blowing flexibly yet strongly in the wind, as the flags themselves must when hung outdoors. A third piece, inspired by a koan-like story involving a monk, the moon and the sound of barking dogs, offers a grid of moon prints covered in delicate, irregular stitching which suggests the path of a comet as much as the path of the eyes that gaze up at the planets from the grassy earth below. Here the man in the moon is replaced by the peaceful face of a newborn baby; printed in black and white, it is as if the babe peers out, eyes closed, from an ultrasound image, as mysterious and wondrous as the celestial beings in the sky. Anyone, of any religious preference, including none, should be able to appreciate that.