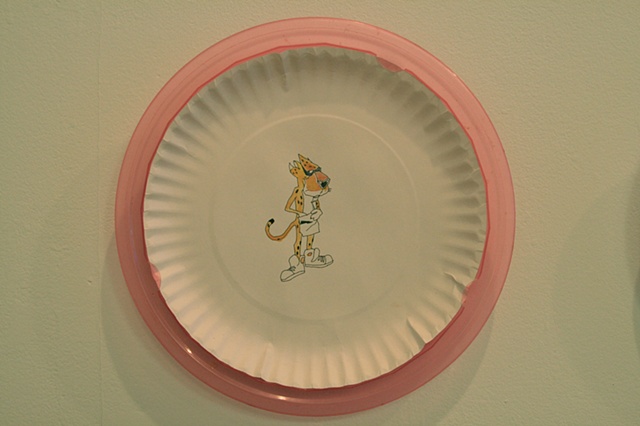 We’ve long depended on artists to represent our icons. For most of human time, this has meant religious figures—Mother Mary, Jesus Christ, and so on and so forth. The icons of the twentieth century, at least according to Andy Warhol, were celebrities and processed food—Marilyn Monroe, Elvis Presley, Campbell’s Soup, etc. Today, in our schizophrenic hyper-real culture of deep religiosity, entrenched secularism, and extreme commodification we still find ourselves in need of artists to represent the figures of our devotion in painted, portable form. Hence the series of meticulously inked tondos presented by Peregrine Honig, which offer up Chester the Doritos Cat, the Pillsbury Doughboy and Ronald McDonald for worship. Leaving aside the not insignificant problems with worshipping at the temple of American junk food, and the fact that in many parts of the world such “food” is considered aspirational, what becomes observable through Honig’s drawings is the fact that all three of these snack mascots are male and not quite, but almost, human. Oh, how we love anthropomorphism. Oh, how we love furry, fluffy creatures. Some need to be cool (the cat), others soft (the doughboy), others, um, well—what exactly is Ronald McDonald anyway? Whether or not Honig approves of our crap food culture isn’t at stake here. What is, instead, and appropriately so—very much in the vein of artists past, who took their commissions from the church—is how convincingly she reflects our culture back to us, on disposable paper plates at that. At least there’s always the possibility that we’ll throw it all out and start over again.