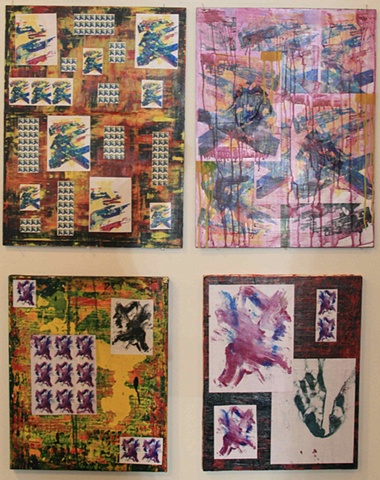 Once upon 1949, Jackson Pollock invented Action Painting. Okay, so eventually it was called Abstract Expressionism, but really what it was all about was how the paint on the canvas didn’t recede into some imaginary window of realism but instead expanded out into the real space of the viewer. Fast-forward some sixty years later to the experiments of artist Dennis Helsel, himself deeply interested in how gestural painting can expand into the viewer’s space, creating an immersive environment of ambiguity, pleasure and questioning. What wholly and thankfully differentiates Helsel’s project from an endless line of rehashed Ab Ex is his introduction of replication to the mix. Never mind the overly fetishized original—Helsel works quickly and frequently, making hundreds and hundreds of letter-sized paintings which he then scans and copies and shrinks and multiplies endlessly. These form the basis for a second set of works, collages which the artist plans to install in an environmental configuration, overtop walls covered with his own drop cloths, tentatively titled “Image Identity.” Viewers are meant to grapple, happily or not, with what it all might mean. Surely they will—but what Helsel might also do for them, since he already has the means, is to incorporate all the stages of his picture making into its final installation, such that the original paintings, the thousands of miniature versions of them which are organized in plexi trading card cases, and the collages are all present at once in the same space, thereby giving viewers more of a chance to understand the entirety of a process that plays smartly and modestly with one of the most important, not to mention macho and boastful, movements of the twentieth century. —Lori Waxman