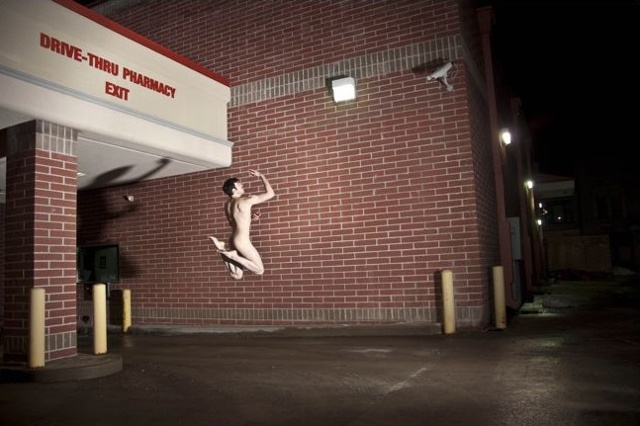 After Vito Acconci, after Marina Abramovic, after Matthew Barney, we have Jason Dixon. Performance art has come a long way, baby, and it is now an extreme sport. Get ready. You’ve never seen anything quite like this, unless that is you were a security guard watching one of the dozens of surveillance cameras that Dixon has performed in front of, butt naked in all his not insubstantial masculine pulchritude, acting the role of Greek god slash sculpture. It’s exhibitionist, sure, but this is the age of reality television, for goodness sake. Exhibitionism is our bread and circuses, and Dixon has made an art of it, melding an entire history of performance art—literally, in his “The Most Performative Piece Ever”—with the decidedly contemporary facts of a 24-hour news cycle, extreme athleticism, competitive everything, metrosexuality and irony, always irony. Is it narcissistic? It hardly matters. Plenty of folks thought Hannah Wilke was too full of her gorgeous self back in the 1970s, until she continued to make cutting-edge work off her naked body through breast cancer and a resulting mastectomy. Certain kinds of bodies are simply more effective at making meaning than others, and artists’ bodies are some of the best material around. Be thankful there is a person out there like Jason Dixon willing to crawl through broken glass, pose as an odalisque, risk arrest for public nudity, and generally make an embarrassment of himself (or at least his alter ego Tito) in order to represent today.