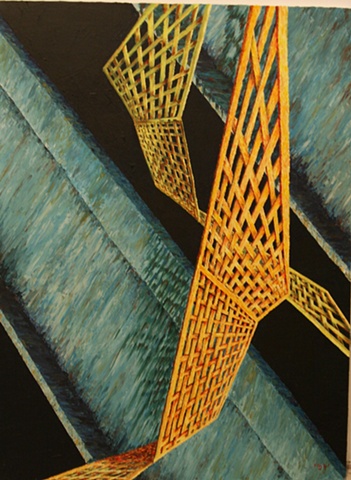 Grace, convergence, transverse, linked—these words, all taken from the titles of Sandra van Tuyl’s ongoing series Common Denominators, denote, as the artist intends, transformative moments and occurrences in the human emotional landscape. They are weighty feelings and relations, and they are uniquely difficult to describe. As, it turns out, they are equally difficult to represent. Van Tuyl has attempted to do so through a language of abstraction, employing skewed perspective, latticework, and color gradation, among other elements. The result is far from clarifying, however, though perhaps this is part of the point. But I rather doubt it. Van Tuyl seems to want to give shape and focus to these notions, but only truly succeeds in the one piece that allows a realistic read: an acrylic on paper rendering of torn barbed wire, titled “Low Level Anxiety ‘Yellow’”. Here a recognizable physical object—barbed wire, the stuff of prison walls—truly signals anxiety, all the more so because of its yellow color, which, according to the Department of Homeland Security, indicates an elevated threat level. It may seem counterintuitive to use the real to represent the abstract, but with painting especially, unless the abstract is used viscerally, the abstractions tend to cancel one another out.