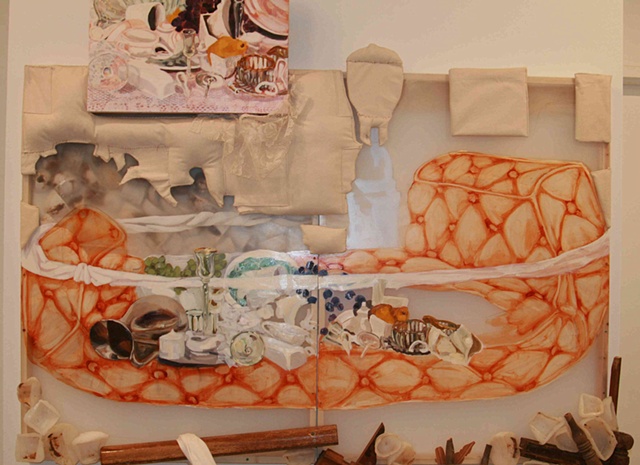 Erica Mahinay makes work in a long tradition of still life painters who have created vanitas, representations of foodstuffs and objects that speak symbolically of time passing and the change and death that it inevitably brings with it. What Mahinay has done with her installation “A Feast to remember all feasts” is to update the tradition, one perhaps most magnificently enshrined in the paintings of Jean-Baptiste Siméon Chardin, an 18th-century Frenchman, by breaking the canvas out of its singular surface and materiality and welcoming in the mixed media and dimensions of frosted acrylic panels, found furniture, plaster and silicon—plus good old paint and canvas. The effect of this is to physicalize the notion of the vanitas, specifically as it relates to memory, literally bringing it into the real space of the viewer and then allowing it to recede back behind those frosted panels. Oddly enough, the most traditional element here—Mahinay’s actual painting of a feast-filled table setting—works least well, since the painting style is too imprecise, too in-between to trigger memory of anything much. The assemblage elements, however, do the trick nicely, speaking through fragmented table legs, scraps of lace, and milky cast vessels of feasts imagined and experienced, past and present. Fine feasts, at that—only the best end in smashed tables and dishware.