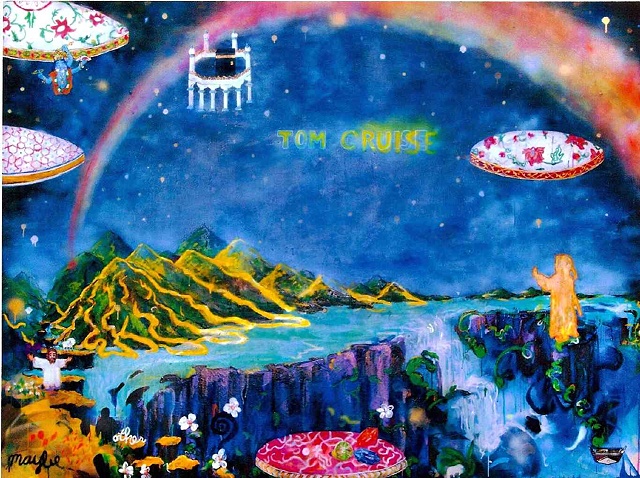 RELAX is the title of David Ford’s recent exhibition at Dolphin gallery. As if one could. Ford’s installation catalogues an array of contemporary problems that no one who isn’t living under a rock should be able to relax in the face of: the labor and living conditions of undocumented workers in the U.S.; the intractable Israeli-Palestine situation; xenophobia toward Arabs, people of Arabic descent or just anyone who looks vaguely Middle-Eastern; terrorism in the form of airplanes; a history of racism against African-Americans; and the militarization of our youth. How all of this ties together depends on your particular brand of conspiracy theory or newspaper; Ford takes a holistic approach and puts everything in dialogue with everything else, a plausible if here rather vague position. Hence the full-service taco cart that proffers food underneath a photograph of African-American ROTC teens, behind concrete block walls built on site by undocumented workers, next to paintings that mix picturesque landscapes with Persian Arabic textiles and celebrity culture and a naïve little Jesus, beneath a flashy VIP sign, near an array of hacked-up model airplanes. Whew. It’s enough to make you want to crawl back under that rock, isn’t it? Please don’t—have a taco, take a seat on some concrete, and ponder what you’re going to do about it all.