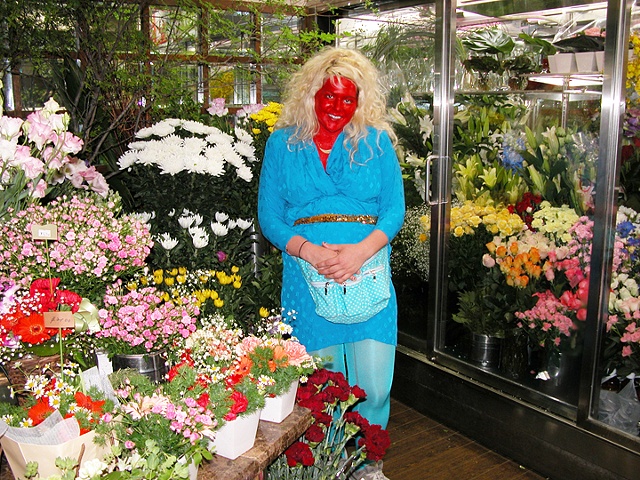 Artists have been turning their canvases on themselves for hundreds of years, if not more, but it is only in recent years that the self-portrait has taken on the kind of conceptual spin that allows for not only the representation of self but the reinvention of self. In the case of Jaimie Warren this process seems to have gone completely haywire: since 2005, the artist has produced dozens of pictures that feature her own self in radically different guise from one image to the next. Many of these are outright bizarre, featuring Warren with dark blue, bright red or hot pink makeup covering her face and pretending to be alternately Mexican, Indian or a Japanese flower seller. Others flaunt American banality, finding the artist ice fishing, riding in a car, or playing it up as a Kansas City Royals fan who likes hot dogs. In the end, despite an almost endless array of information about this artist, we have no idea whatsoever of who Jaimie Warren might actually be. And that, if anything, seems to be the point. Today, amid every kind of lifestyle choice and makeover option and frequent flyer point, anyone can pretend to be anyone else, even for just five minutes—a reality that, in the shape-shifting hands (and lens) of Jaimie Warren, proves to be something excessive and even grotesque, a contemporary option to be truly wary of.