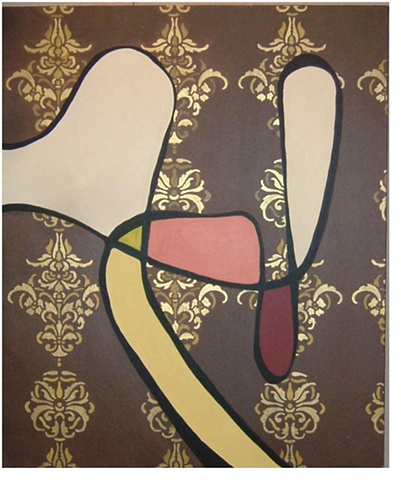 In Michelangelo Antonioni’s 1966 film Blow-Up, a man obsesses about a small event accidentally captured in a photograph he took. He blows it up over and over again in the darkroom, hoping to learn the truth of what happened then. Instead he finds out about fragmentation, and how fascinating details can become when enlarged beyond their original scope. I describe this cinematic classic as a lead-up to Ed Larson’s abstract paintings because they feel to me as if each and every one of them is the blown-up fragment of an entirely other, unknown work. Some even seem as if they might be fragments from different parts of the same work. This should not be taken to mean, however, that the paintings feel incomplete; on the contrary, they are marvelously if paradoxically whole. What do they look like? Each is inscribed with thick cursive black lines that divide the canvas up into sections Larson fills with wallpaper patterns and pleasingly odd color combinations. The artist explains that these works are inspired by katagami, the stencils used to dye kimonos. I’m more familiar with Japanese woodblock prints, and they remind me of these too, or rather of tiny parts of them writ large. It’s as if Larson has taken the idea of attention to detail as a working method in and of itself, finding details—whether in other works, as my imagination has it, or in artistic experimentation, as is more likely the case—that can stand on their own as the whole.