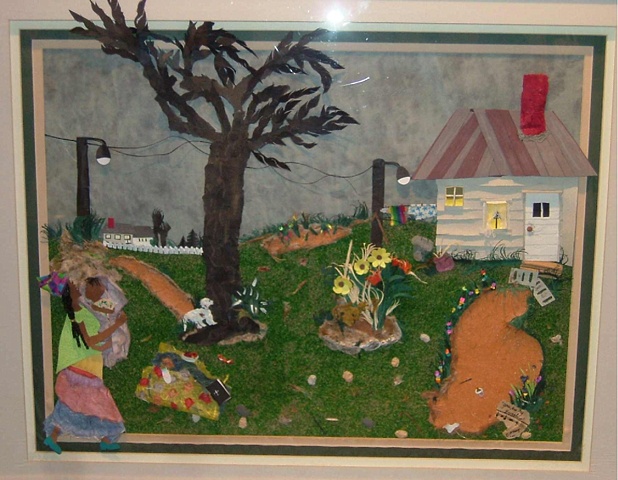 Drawing does not always happen with pencil on paper. Some artists draw with fire, others with rotary drills. C’Omega Barnes draws with scissors, sharp little manicure scissors. Instead of applying image to paper, she finds her images in the paper itself, deftly slicing through rainbows of thick stock until there emerges a floral still life, an elegant figure or even an elaborate narrative scene. It’s a technique she has learned and perfected entirely on her own, a folk art of one with unexpected expressive possibilities. Even her more basic compositions surprise when seen up close: a teal vase ripples with tiny cuts that suggest elaborate glazing and reflected light, while those on a woman’s head connote an elegant up-do of curls and waves. But though these simple pictures are crafty and accomplished, it is in her complex pictures where Barnes’s art does something exciting on more than just a technical level. Here bits and pieces of paper are used to create believable spaces in which people can live—a woman and child outside a clapboard house, situated on a lane lighted with street lamps and lined with fences and hanging laundry; a class reunion in a hall with former classmates so detailed as to be recognizable to one another. It’s this kind of accessible storytelling that folk art has always excelled at, more so than depicting singular subjects—one hopes it is the direction in which Barnes will further her own practice, too.