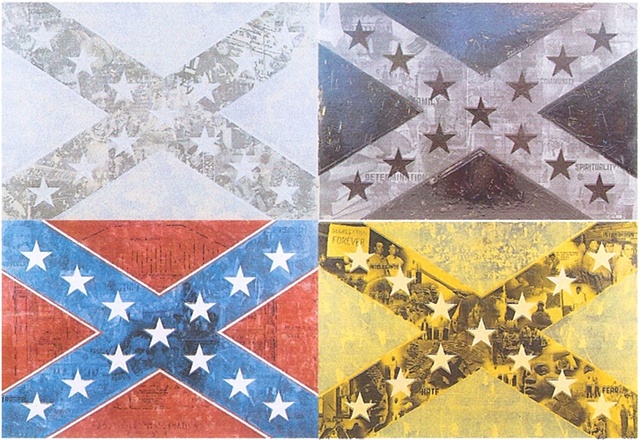 Is there a more loaded American symbol than the confederate flag? I suppose the greenback gives it a run for its money, bad pun intended, but the sheer indispensability of money will always trump any concerns with its history or the current state of American, i.e. world, capitalism. Not so the former flag of the southern United States, whose usefulness today seems more or less limited to 1) an unapologetic nostalgia for the way things used to be, and 2) a criticism of the way things used to be. “The way things used to be” in this case refers to a history of slavery, segregation and racist violence directed toward African Americans. What artist Dave Alsobrooks has done in a series of four collage canvases based on the design of the flag is, oddly enough, to acknowledge both of these possibilities. One white and one black canvas each convey a nostalgic picture of, respectively, conservative white and black family values. On their own, these stand as strikingly uncritical visions of a divided south. Displayed alongside a second pair of pictures, however, the tone changes. Here is the awful history of it all, classic red and blue for Civil War era challenges, yellow for Civil Rights era ones. Taken apart, a limited, almost clichéd history of the south presents itself. But taken together, a complex version emerges.