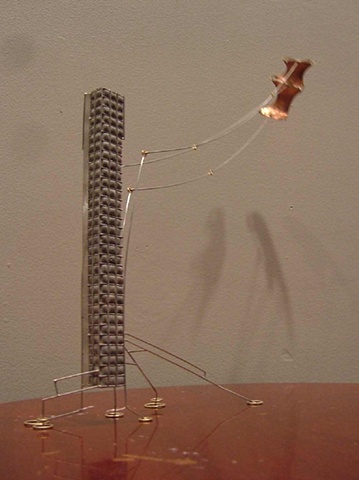 Once upon a time there was a land where all the buildings, from the smallest houses to the tallest skyscrapers, had fine steel legs on which to walk. But these structures, being built out of concrete, were so heavy that they needed the help of the wind, harnessed through long copper sails, to move from one site to another. Howl’s Moving Castle was a close relative, Calder’s Circus a distant one. Tim Burton was known to visit on occasion. The benevolent ruler of this land, from whom all the structural inhabitants were descended, was named Collin Blackmore. Had he been born in another era on distant shores, he might have been just another young man who tinkered with scrap metal and putty in his garage. But fortunately this banal earthly reality was not so, and King Blackmore lived out his days, and the days of his edifice-subjects, under the graceful, crafty light of a truly charmed constructor spirit. And the buildings were happy, the skies delighted to blow them this way and that, the ground pleased to feel their footsteps on its back.