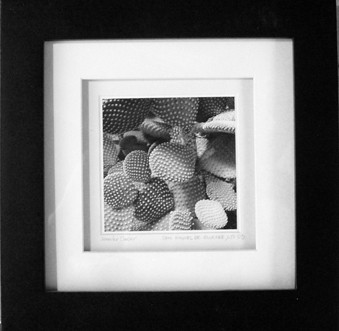 Artists have been finding formal inspiration in plant life for as long as they have been making pictures, but it is Modernist photographers like Edward Weston who truly mastered the genre. What do to with a camera and a garden full of cacti and succulents after he’s come and gone? Jennifer Claster sets out her own answer to this question in a series of black-and-white images shot in a botanical garden in San Miguel de Allende, Mexico. Like those who came before her, she abstracts what she finds into high contrast shapes, shadows, and textures. Unlike them, she uses a digital camera which sometimes flattens out and dulls the details of her subjects. This is unfortunate in a picture of a broad-leafed succulent, which feels dry and dead. And while it’s true too of her photo of a strange cactus, here it’s almost beside the point, since the plant is such a fabulously bizarre subject, and the way Claster frames it allows it to look intriguingly like it’s covered in pompoms or polka-dots or upholstery tufts. Finally, in a third image, this one of a stringy, narrow-leafed succulent, the flatness and lack of detail allow the picture to take on its true interest as a kind of abstract drawing with the jazziest of light effects.