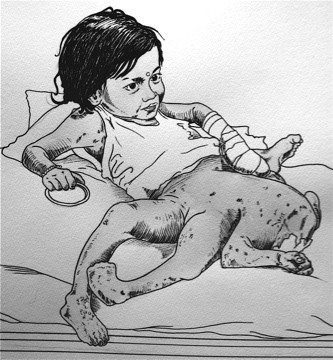 Come one, come all, and see the dapper but vicious murderer in fishnets! Don’t miss the prettiest little half-feline girl! Be sure to catch the shark-headed man, always impeccably dressed in a natty suit and tie! Before you go, have a look at the human blockhead, who drives nails deep into the middle of his own head! Welcome to Ray Cathode’s Freak Show, a series of mixed media and pen-and-ink drawings that celebrate strange configurations of human and animal, nature and culture. Here the goddesses are wee sphinxes and the most elegant men are dangerous hybrids of their own. As they have been in cultures of the past, if not today—remember the sphinxes of Ancient Egypt, the Sheela-Na-Gigs of Medieval England, this last a subjects of Cathode’s as well. Today we pay tribute only to the gods of civilization, rejecting the man-beast hybrid as an unnatural, monstrous and imaginary thing rather than a powerful one. Such creatures are relegated to the sideshow, when they are allowed to exist at all. As they do here, in Cathode’s drawings and collages, allowed one last gasp before they too go the way of all outdated things: no longer made, no longer available, even when wanted—like cathode ray tube television sets.