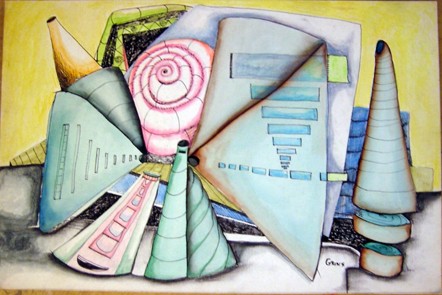 Oddly enough, some of the most prolific artists often maintain the most consistent styles. Perhaps that isn’t so odd after all, since the energy that goes into constant production goes there, rather than toward stylistic experimentation. Ingrid A. Grins, painter of imaginary landscapes, psychedelic portraits, random animals, and funky abstractions, is just such an artist. Though the subjects of her work seem to be a catch-all, the way in which she depicts them is recognizable from one piece to the other. Which is not to say that it is at all simple, singular, or even easy to describe. Imagine a cross between Native American patterning, early Abstract Expressionism, something of the 1970s, and postmodern furniture of the 1980s, the kind designed by Memphis and brought to Hollywood in the film “Ruthless People.” It isn’t easy, but it is what Grins does. Which might reveal something of the biography of an artist born in 1952 in Melrose Park, Illinois, or perhaps not. That’s the kind of thing that idiosyncratic styles get one to musing on.