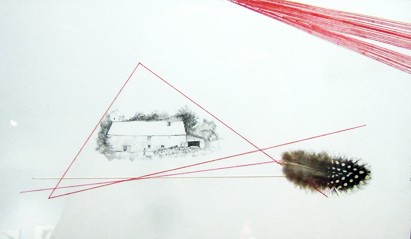 A middle-aged woman, weather beaten and stern, neat and knitting. A country barn, ramshackle and overgrown with greenery. These are two images traced by Emily Walsh’s careful, delicate hand, two pleasing if common enough pictures through which to signal home. Where they grow strange and thoughtful is in those features that have been added to them, unexpected graphics and materials that expand on such conventional notions of home and make of them something both more unique and more real. The woman, then, knits with her hands but from them also shoot sharply-drawn pencil lines, vectors that indicate a coming and going that are as much a part of her as is her resolute stasis. The barn, meanwhile, sits at the center of a triangle of yet more vectors, these stitched with red thread that makes the barn a target but also something to be approached—or maybe skirted—from many angles. At the edge of one these vectors lies a collaged feather, half matted fuzzy gray, half striking graphic of black and white. A strange bird, that one—or perhaps not. Home, after all, is that soft downy fluff, but it is also the place to fly away from, in order to gain the bright new patterns needed to stay fully alive.