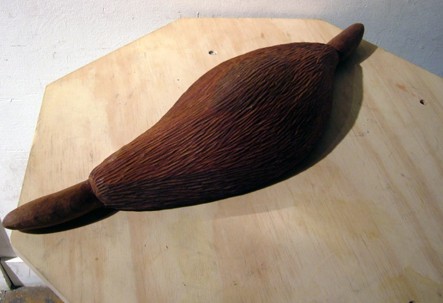 Organic matter can be human or animal, plant or insect, cellular or whole. It ranges in scale from the invisibly small to the monumentally large. Anne Alexander sculpts modestly sized objects that—despite the absolute and comforting solidity of their wood, stone and ceramic forms—flow between these categories as if they were mutable and hybridized. A gleaming piece of raku, just larger than hand sized, could be a star fish or a doll with many bulbous legs. “Crawler,” a foot-and-a-half-long Mahogany carving, is part giant worm, part beaver skin, part two-headed phallus. “Cluster,” three joined balls of smooth Alabaster, evokes male and female body parts made small, as well as cellular configurations made large. The erotics of her work that these descriptions suggest occurs most naturally of all, of course. That which is organic reproduces itself through acts we humans consider sexual. (Even worms have sex, according to Isabella Rossellini.) And though sexual reproduction and erotics are not one and the same, nevertheless for us humans they are often deeply intertwined. The surprise of Alexander’s work is how much erotics arises out of the non-human matter.