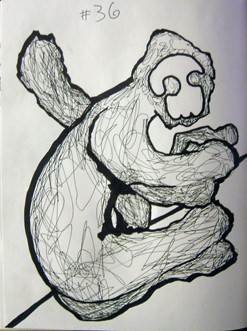 The word “disenthrall” does not mean what I assumed it meant: to un-enthrall, as in to bore. Somewhat to the contrary, it actually means to set free. Why this matters is that “Disenthrall” is the title Dallas Johnson has given to his sketchbook of doodled creatures, a horde of monsters—amoeba, skull men, bird-fish, bear blobs, and others—who need all the context they can get. So: disenthrall. To set free. But free from what? By the looks of them, Johnson creates his beasts by first scratching out a page of doodles, and then finding the forms within. Key is the fact that Johnson’s style of doodling is utterly chaotic, the scribbles of an aimless hand and pen. Helpful, too, are the occasional bits of text he scatters throughout, sometimes as if spoken by his monsters, words that bespeak a need to leave hate, clouded eyes, and humanity itself behind. The whole is a bit of a riddle, wherein Johnson challenges the viewer to make sense of it all, to make something of his own chaos, as he himself has done by creating an inhuman rather than a human order from it all. It isn’t any kind of civilized order, but surely that can’t be the only sort possible. Our so-called civilized order, after all, has nearly led to the extinction of the planet, through a whole other order of the monstrous.