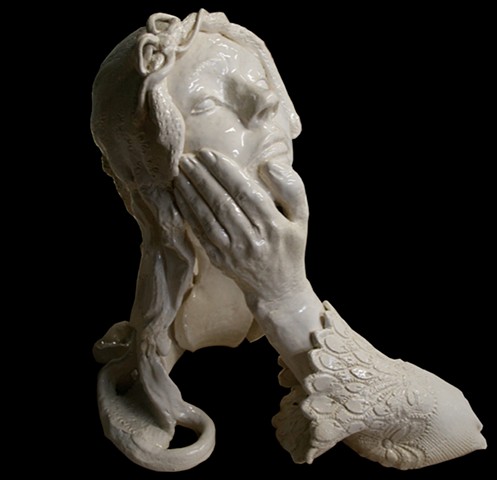 What does it mean to be a strong woman? Valorie Schleicher asks and answers this question through a series of ceramic sculptures and color photographs which, though made in recent years, harken back to the essentialist messages that Second Wave feminists began to promote in the 1970s. Accomplished and graceful, Schleicher’s sculptures illustrate beautiful women and girls in poses meant to evoke innocence, nurture, nature, contentment, softness, wisdom and other traits traditionally located in the female half of the human species. A handful of photographs taken in London and Rome depict antique fountains and monuments representing mythological women possessed of the kind of superhuman strength that enables them to hold up buildings and wrestle wild animals. Whether based on living women, as some of Schleicher’s ceramics seem to be, or symbolic ones, as the public monuments certainly are, what all of these women have in common is that they are not in fact real: they are, rather, idealizations of what our culture believes women ought to aspire to. That’s what can be frozen in place and in time, but it’s almost impossible to enact in real life.