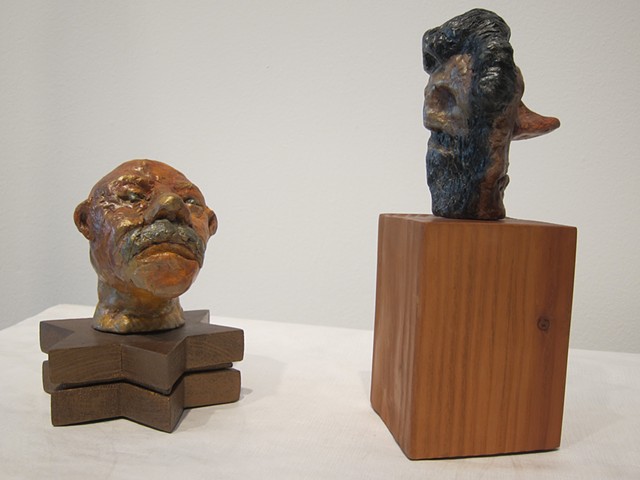 There are many kinds of befores and afters. Khalid Ahmed’s take plastic, measurable, visual form. Formerly an artist and professor of art history at the National College of Arts in Lahore, Pakistan specializing in Mughal miniatures, Ahmed sustained a brain hemorrhage a decade and a half ago that left him unable to practice art with his dominant right hand. So he has learned to use his left to sketch flowers and urban and rural landscapes, as well as to shape small sculptural portrait heads. (Of particular note is a double head whose sad hollows seem to have been painfully punched in, eliciting a pathos that belies the comically large nose hanging off one of its faces.) Despite their different subject matters and materials, all of these works draw their interest from thick accumulations of paint and clay, respectively. Finely detailed as the 16th- and 17th-century miniatures of Ahmed’s study they cannot be. But as his sculptures in particular prove, meaning and richness can find their way in between even the stubbiest and bulkiest of gestures.