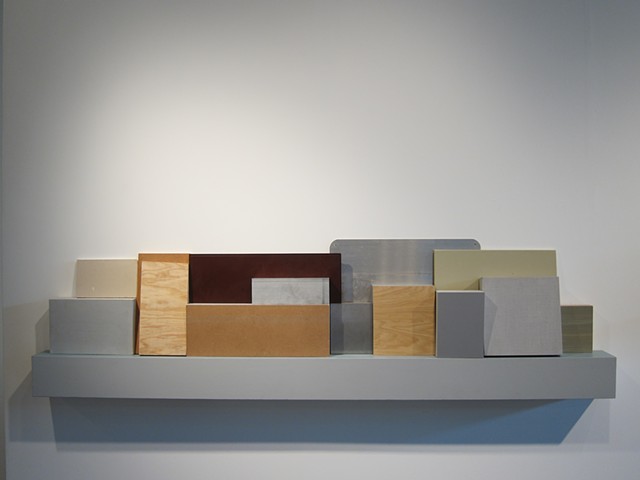 High has met low many times over the last hundred years of art history, but rarely have the results been as pristine as those of Keith Nelson. Rauschenberg made his raucous combines, Rosenquist his riotous panoramas, Murakami his malevolent cartoons. Nelson, however, works more in the vein of restrained modernist masters like Joseph Albers and Donald Judd, but he does so through a variety of materials reclaimed from his work as a museum preparator, and even from his own studio practice. The list includes plywood planks, a hollow metal brick, linen-covered stretchers, a cherry-red molding, a taupe aluminum shelf, a drywall fragment and one exceptionally beautiful glazed ceramic toilet tank lid. Nelson refines some and uses others as found, then arranges them in small and large groupings on shelves or plinths, displaying a meticulous sense of material, textural, tonal and proportional balance. Seen from a distance and all at once, the individual components appear to be of no particular interest in and of themselves, mere parts of an overall whole. Examined up close, however, most bear up surprisingly well to close scrutiny. That’s the magic of collage, after all, and Nelson appears to have it.