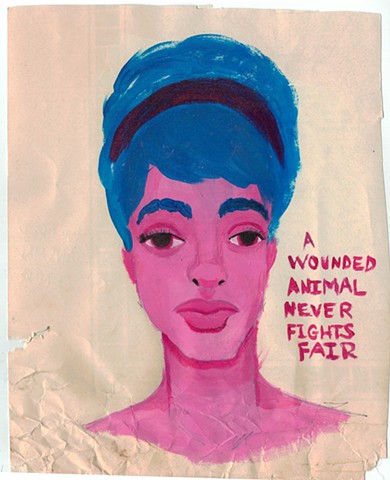 Iconic images of women seem to fall into one a few available categories, including these two: Rosie the Riveter’s can-do spirit and the Virgin Mary’s untouchable innocence. Lucy Miller’s paintings on board and paper manifest some of Rosie’s bold strength and some of Mary’s martyrdom, updated for the racially complex and casually violent world of today. (Not that ancient Christendom was simple or World War II peaceful.) Miller paints portraits of women that look as if drawn from magazines of another era or else straight from her imagination. Two Hollywood dames promise to destroy anyone who gets in their way, while a sheepish girl with blue skin and a demure debutante with a blue bouffant evoke immense pathos, in their demeanor as well as their words. Text is effectively appended to many of the pictures, despite some typos and awkward penmanship. With such a cast of characters to choose from, which icon to venerate?