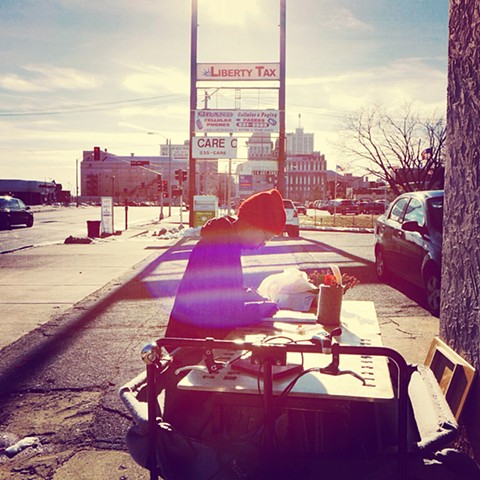 What’s a fair exchange? Ilene Berman offers one of her drawings in exchange for one done by a stranger on the street. She provides the materials, which unpack as if magically from the customized cargo bike she alternately parks at a senior center, a youth group and on the street. The street is significant: Delmar Boulevard, recently described by the Washington Post as “the line that divides a city by race and perspective.” Berman is acutely aware of the differences that mark the north from the south sides of the street: she lives north and has made a walking study of it. She has also begun a campaign to try and render the north-south exchange fairer. The bike is part of that effort, as are a series of ten framed handkerchiefs, each embroidered in gold floss with a single line from a manifesto. Businesses and a school north of Delmar display one each. The appearance may be fragmentary but the effect is not: it will take more than just one artist to achieve the changes Berman envisions, so she’s out there gathering partners through each exchange.