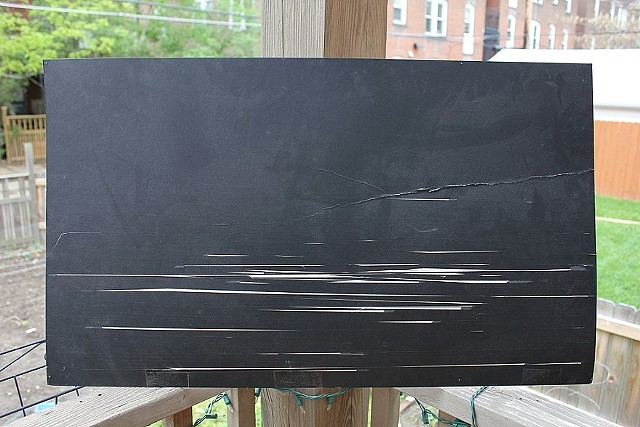 Beginning in the mid-1920s, the Surrealists mounted a campaign to find the missing marvelous in everyday life. They believed that life had become banal but that its wonders were there, lurking beneath the surface. All one needed was to be primed to recognize them. By the evidence of a trio of photographs and a small, dense sculpture, John Early is well prepared. The pictures, taken in urban residential backyards, frame nothing less than wooden fences, spring shrubbery, a garage roof, and the backs of houses across the alley. But they reveal so much more: a riot of patterns, the mystery of shadows, the strange flattening of three-dimensional space, the uncanniness of repeated forms. A dingy black mat board, propped up against a porch post, becomes an artful repository of primal gestures, and the world behind it its frame. A heavy, rounded blob of plaster and dirt, titled “Mountain,” encapsulates the modesty of Early’s project and also its incalculable magic. It would be a molehill by any other name, but isn’t life that much more extraordinary when he calls it a mountain?