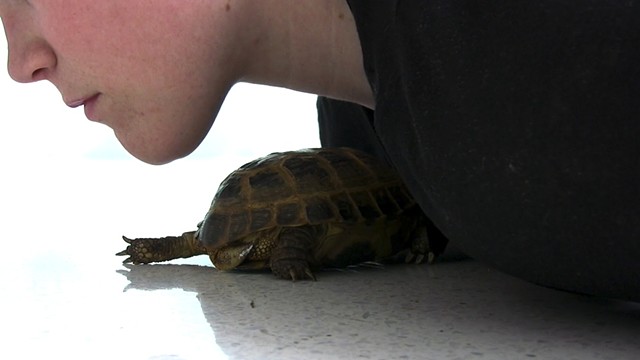 We know that the built environment was designed and built by humans, but we often fail to realize the extent to which it shapes us in return. Sarah Witt presents “The Funeral,” a gesamtkunstwerk uniting two years of performative gestures, as a testament to one woman’s reluctant embodiment of this predicament. Finding herself an inhabitant of a slick hi-tech corporate space, she experimented with ways of knowing it in a physical sense by going all white and crawling across the floors, and bending herself around the building’s corners until she disappeared. She took on its robotic imperatives by doing repetitive tasks with gadgets until they drove her mad. She tried to resist by driving out to the desert and rolling around with the tumbleweeds, and by making a drippy, dirty mess of the building’s meticulousness. None of this worked. Finally, Witt went back in time, past the Situationist International call to psychogeographic arms, past the Surrealist desire for a psychological marvelous, all the way to Guy de Nerval’s nineteenth-century flaneur, who walked through Paris with a turtle slowing him down. There may not have been much traffic to impede in Cambridge, Massachusetts, where Witt and her reptilian friend went crawling, but at least she had found herself a better friend than Building E14.