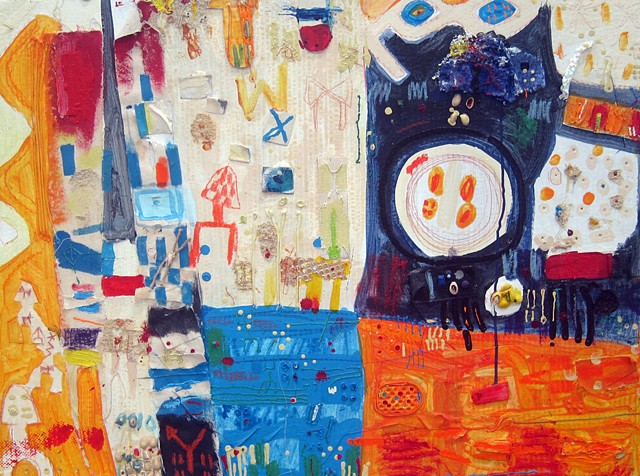 During the Renaissance, artists relied on general knowledge of Catholic tenets in order for their paintings to communicate. Conceptual artists depended on language, often English, through which their work could be understood. ‘Jide Aje is inventing something—new credo, new lingo, it isn’t entirely clear. But it coheres and conveys. In three mixed media paintings from his “Africa Series,” the artist deploys scrappiness with criticality and marvelousness, from the eight-layer-thick corrugated cardboard that form his canvases to the wide array of quotidian materials that stick to them. Subtly consistent paint choices—orange, blue and cream, or green, blue and brown—unify seashells, wooden clothespins, colored string, paper and plastic beads, pistachio shells, deft little mask drawings on vellum, and bits of textile. There’s even some actual canvas tacked on with a pushpin, as if to acknowledge a possibility considered and then rejected. With a minor debt to Basquiat, Aje proceeds solo, dictating novel vocabularies and then displaying them for the rest of us to read. Somehow we can.