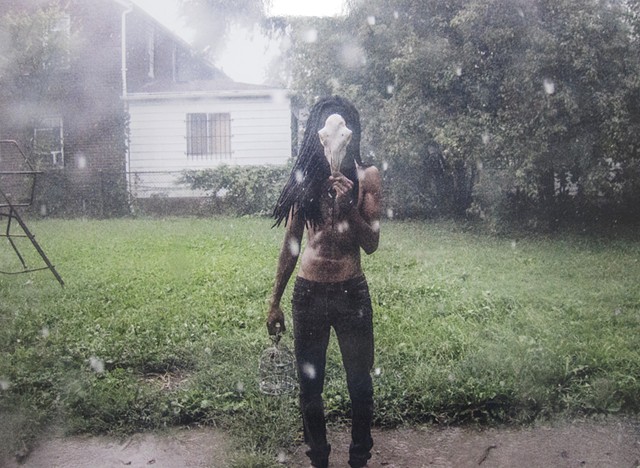 Andrew Ross Evans claims surrealism as the mode in which he makes photographs, and this intrigues. Surrealists like Cartier-Bresson and Kertesz mostly found their mysteries on the street, through constant looking and an appreciation for the marvelous as it already exists. Evans, a young, self-taught cameraman who uses film, likes to engage in darkroom manipulations that pop color into black-and-white images. It’s a neat trick that makes for pictures of objects with strong commercial potential but distracts from Evans’s true depth. A lithe man, topless in black jeans, shades his face with an animal skull around which his dreads swirl, blown by a hazy snow shower and set against the green grass of an urban backyard. A young woman in a flowery housedress lies prone on the floor, a funnel of steam rising straight up from her belly. Here is surreality, but also a bit of Cindy Sherman and Wolfgang Tillmans, and more importantly, here are young people portrayed with such strange grace as to be profoundly moving. —Lori Waxman 11/29/15 11:07 AM