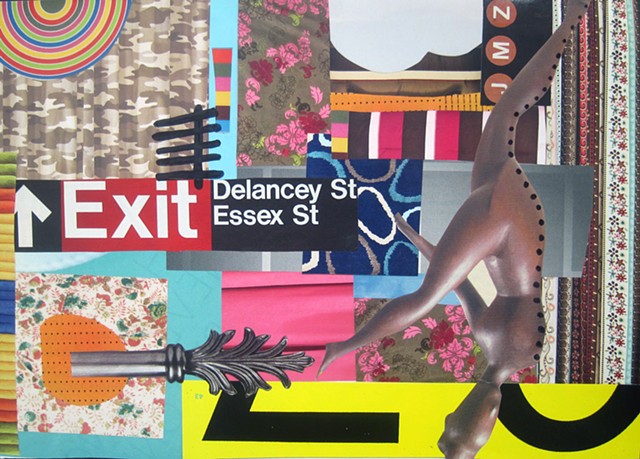 Collage has been many things in different hands: political criticism by Hannah Hoch, deconstruction of representation by Robert Rauschenberg. Jennifer Konikow makes of it something aspirational. With a keen sense for clashing patterns and coordinating colors, Konikow devours the magazine rack, cuts up its most appealing pages, and pastes them into something entirely her own. Mostly she clips images that can be reduced down to vibrant forms: stacks of bathroom linens, camo curtains, a blue rug with loopy circles. These quickly go freeform. Other kinds of pictures need more work: a Picasso flower-woman, sliced from its surrounding linen, grows tall in a new landscape. A wall of windows, turned sideways, becomes a floor. There’s power in Konikow’s ability to reimagine and reconfigure the world into scenes of her own invention. All the more so because that world isn’t the one growing and bustling, living and dying outside, it’s the one tightly packaged and printed into a consumer goods magazine. They aren’t meant to be scissored by an artist; they’re meant to get her to consume the advertised product. Cut!