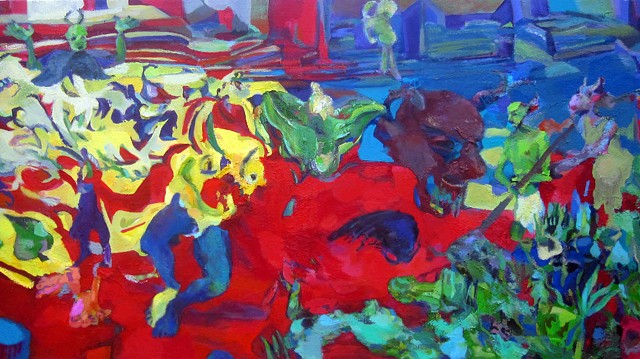 Historic surrealism produced two kinds of artwork: those pictures, like Dali’s, that aimed to meticulously represent marvelous visions, and those, like Miro’s, that attempted to induce them. Douglas Kueker, painting today, some 90 years after the movement’s heyday, seems to be trying for a midpoint between depiction and production, with a bit of process thrown in for good measure. In a trio of chaotic canvases, he unleashes carnivalesque visions of fiery horned dragons, lime green satyrs, a lilac dancing maiden and a whirlwind of less easily identified creatures. Bits of fabric and foil add texture but inconsistently: his best composition has none and the others want more. That’s the middle: it seems like enough because there’s a bit of everything all jammed in, but ultimately the artist has to choose what will stay and what will go. Even if it’s a devil of a decision to make.