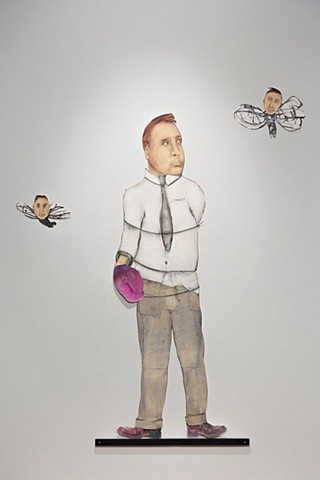 The people in Ian T. Carey’s cut-paper and painted-panel portraits bring an important message. Some have heads on adult human bodies, while others grow visages on giant larvae, winged insects or web-footed fowl. They’re Caucasian in color and features, vaguely familiar from the popular media landscape and dressed in nothing special. Their appearance is heavily worked, bearing the marks of charcoal, watercolor, pastel and ink, with the occasional digital print thrown in for good tricks. How do I know they have something to say? Their outsize heads, animal bodies and occasional halos connote medieval icon painting and modern political cartooning—and both of those media have always been about the message. However, medieval Christians knew all the codes of church pictures and newspapers usually caption their editorial comics or else print them alongside relevant articles. Carey gives a title—“Hoodwinked”—but no sense of who’s doing the blindfolding or what will be revealed when the blindfold is finally removed. Though we all should wish for that unhooding.