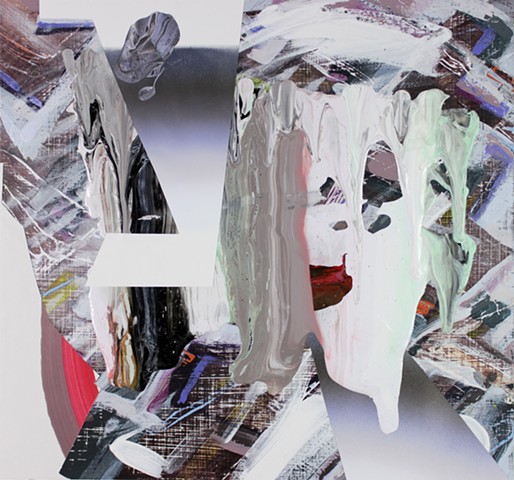 To make a painting, Megan Kathol Bersett does not just paint. She cuts, scrapes, pastes, squeezes and pours. The end product might be described most accurately as a collage, a collage made entirely of paint. As in the photomontages of the Dadaist Hannah Höch, the more the merrier. A pair of paintings by Bersett bears this out: “modest avalanche,” a diminutive square panel bursting with melted ice cream pours, plaid undergarments, bubbly blobs and smooth topographic slabs, never ever stops. “Leads,” twice as big and half as occupied, never really starts. Taxonomies are useful because they clarify purposes that can otherwise remain unclear. In the case of Bersett’s paintings, acknowledging collage as a method helps reveal the collisions, contrasts and coatings that are their strength—despite the fact that it’s all made of the same stuff: paint. If such categorization still seems esoteric, well, then you were never a Victorian.