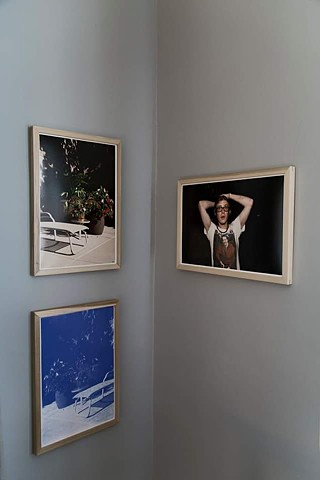 When the world, with its rainbow of colors, is photographed on black-and-white film, where does the color go? This question occurs while looking at work by Rachel Herman in which the artist puts a series of photographs through multiple printing processes: full-color inkjet printing, a blueprint-like method called diazo, and gray-scale on transparent acetate. The subjects—an effervescent singer on a TV screen, a teenage boy wearing iridescent sunglasses, a dog about to catch a tennis ball, and more—seem random and become increasingly elusive with each step in the artist’s process. Conversely, the changes incurred with each of those steps—of medium, of clarity, of orientation—become increasingly obvious. Herman is here an artist engaged in chemically engineered transformation. But according to fundamental scientific properties, energy is not lost through such operations, only mutated. Color goes somewhere, and Herman remains in its quest.