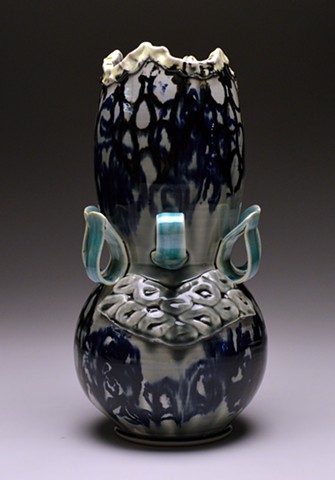 What is good taste? During the Joseon Dynasty of Korea, minimal white porcelain was prized above all other ceramics. In the Ming Dynasty of China, vases covered in riotous designs were all the rage. Mariko Brown Harkin tests these and other decorative mores in a series of vases, bowls and cups thrown by hand on the potter’s wheel. The challenge posed is the equation of excess: if a color or pattern is tasteful on its own, what happens when it’s fused with other equally tasteful elements? In combination, are they still aesthetically pleasing? A tall vase has not one but six handles and is ringed around its base by strange protrusions based on muqarnas, ornamental honeycombs found in Islamic architecture. The handles on a second vase point both up and down and are surrounded by at least four more unrelated decorations: two glazing techniques, fluting and textured sprigs. Subtlety can be lost on those not of the ceramics cognoscenti, so obviousness helps, as does humor. Sometimes more is more.