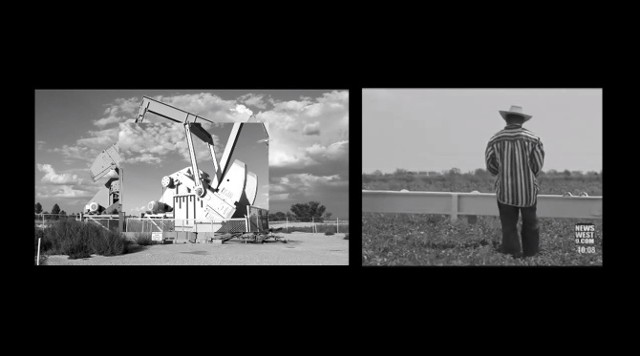 Imagine picking up a tabloid from the newsstand and finding it to be devoid of text, with only blank off-white space surrounding the colorless photographs that float on its pages. Imagine watching a segment from the nightly news without sound, playing over and over again on a hypnotic loop. How would you know what you were seeing? How would you know what it all meant? In a newsprint edition and a video diptych, Hope Mora challenges the viewer’s ability to make sense out of mediated—and, in a sense, de-mediated and re-mediated—images that range from migrant farm laborers at work picking vegetables to oil derricks pumping away, from a bored kid in a classroom to heavily made-up Latina teenagers in hoodies. The pictures aren’t a rebus whose solution reveals a hidden message, but rather a prompt to learn to read the world around us more critically. Otherwise we might succumb to a depleted sense of “Pues, Asi Va La Vida” (That’s How Life Is)—the title Mora gave her video.