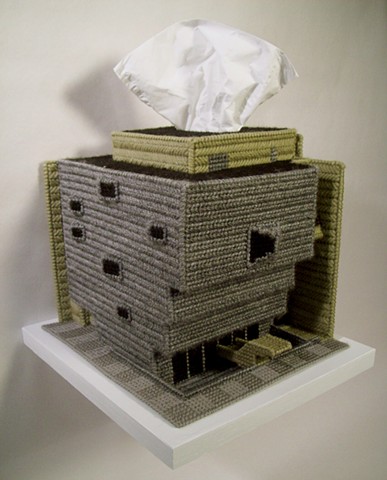 Standing on the 300 block of East Superior in downtown Chicago, a lover of modern architecture could cry. Bertrand Goldberg’s magnificent vertical clover of concrete, the former home of Prentice Women’s Hospital, is nowhere to be found, demolished a few years ago to make way for a dull expansion of the Northwestern medical campus. Kurt Treeby offers something with which to dry those tears and have a chuckle besides: a tissue box cover in the shape of the lost building. Using plastic canvas and acrylic yarn, Treeby has taken a kitschy craft and raised it up high. “Disposable,” as he’s titled his series, pays tribute to Marcel Breuer’s jagged Whitney, one of SITE Inc.’s Best Products showrooms, and William and Tsein’s American Folk Art Museum, among others. We tend to think of architecture as something permanent but it isn’t, even the best of it. The sharpest irony of Treeby’s project is the ability of the lowliest craft to offer so fitting a memorial to the highest of the arts.