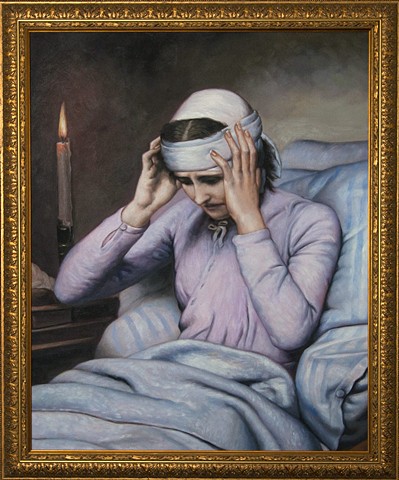 In China, it has for millennia been traditional for a painting to go through multiple copies. An original landscape scroll might have been inked in the 6th century then recreated and lost a dozen times over by different artists in the new styles of later eras, complete with lengthy poetic inscriptions added by this and that owner. This is called the archaeology of the image, and David Austin offers a contemporary version of it in his series of mutated paintings. To make them, Austin digitally manipulates pre-existing canvases then, coming full circle, sends them off to be painted in China. Dozens of images are in process, but the one that is complete offers a reworking of Gabriel von Max’s 1885 portrait of a visionary nun. Austin removed the religious references central to the original and altered the woman to resemble his late mother, but otherwise the pictures look similar. In the archaeology of the image, something new is added with each subsequent version. That’s true here too, though it has to do with digital techniques and global outsourcing, but what could be newer than that?