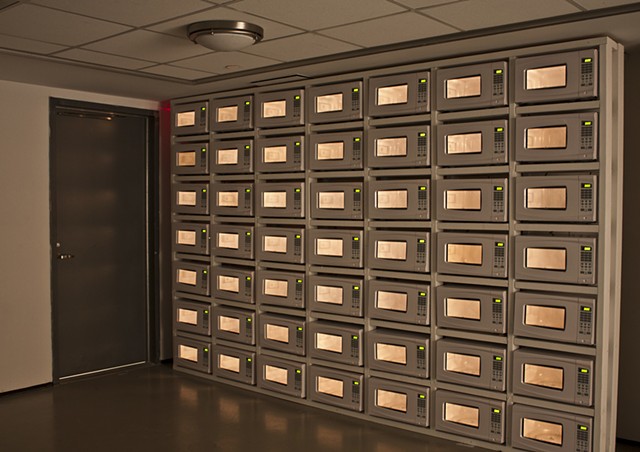 Since the late 1980s most homes in the U.S. have included a microwave oven among their appliances. I grew up listening to that hum, watching that spin, seeing that glow, hearing that beep. But until I looked at the work of Kristin Richards, I had not yet encountered the microwave in an art gallery. That’s odd, come to think of it, as the objects of everyday life have figured prominently in artworks since at least the age of Pop Art. In her installations, Richards has taken on the microwave as modified ready-made, as site, and as metaphor. Installed outdoors at night near tract housing, a dozen of them radiate alien life, though it isn’t clear if they wish the inhabitants well or harm. Stacked in a tidy grid of 49 units, they form a wall-size computing center, controlling who knows what. It all works uncannily well, and there isn’t a frozen burrito in sight.