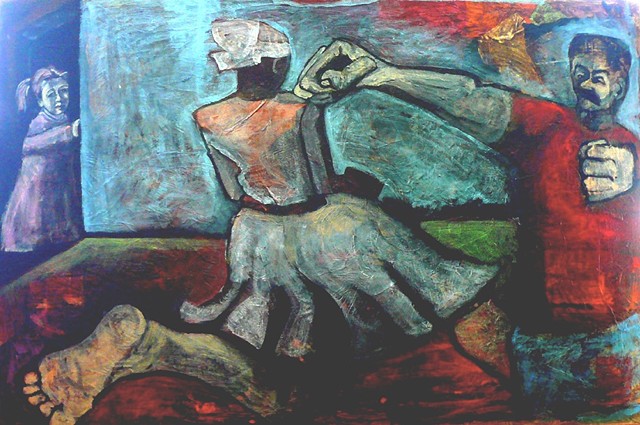 There’s almost nothing lovely about the subjects Christine Kuhn depicts. Among them, her mixed media pictures illustrate a murdered woman, a young boy neglected because of the methamphetamine epidemic, a child as the silent witness to domestic violence, and the unfair burden of female aging. The images themselves, however, have all manner of preciousness built in: the otherworldliness of magical realism, the shimmer of a rainbow palette, the dense gleam of the epoxy resin under which it all lies. This tension is crucial—it makes you look at something you otherwise might want to ignore—though sometimes lessened by a cartoonish quality. A separate series of miniature collages that recall the Merzzeichnung of Kurt Schwitters testify to Kuhn’s ability to see beauty everywhere, even in scraps of packaging. That may be a more useful approach to the ugliness of the world than it at first seems.