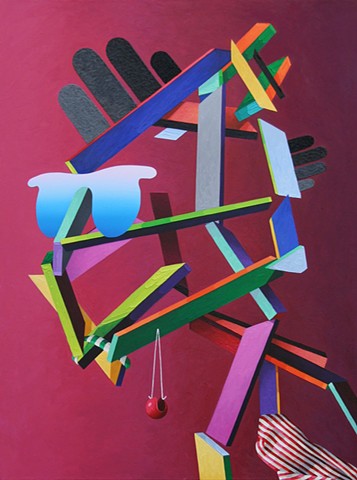 What is a self? Philosophers and physicians have long debated this question, focusing variously on the ways in which we transcend our bodies or are rooted in them, are tied to our genetic makeup or are influenced by our surroundings. In a series of ostensible portraits, John Harlan Norris adds an unsettling twist to the ongoing discussion. His oversize canvases look at first to be pictures of bright jumbled kid stuff—think Tinker Toys and plastic straws strewn all over the floor—but on second glance most coalesce into precarious busts, complete with eyeglasses for seeing or a boom box for speaking. Reminiscent of the hyper-controlled surfaces, garish colors, and quotidian subjects of artists like James Rosenquist or the Chicago Imagists, Norris’s paintings nevertheless represent the self of today, attuned as he or she or they is to social media, gender flux, the hipness of eighties style, and the constant threat of disintegration. One false move and everything could fall to pieces—and then be reconstructed, perhaps a bit differently next time.