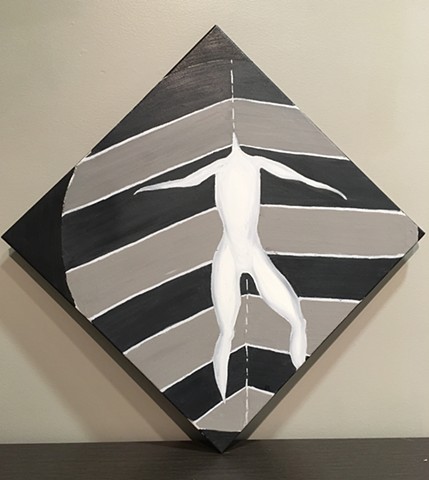 One of my favorite films of recent years was “Inside Out,” the Pixar production from 2015 that went inside the head of an 11-year-old girl whose family had just moved from the Midwest to San Francisco. The genius of the movie was that it animated the girl’s feelings into something that could be seen: five mono-colored characters, each symbolizing one of the basic human emotions. Shannon Galyan, a young painter also from the Midwest, has evolved a moving and idiosyncratic style of abstract painting in which she, too, assigns simple shapes and colors to her own experiences of optimism and love, depression and desperation, protection and spirituality. A depiction of terrible helplessness takes the form of a flailing, headless figure stuck against a harsh ground of black and taupe stripes. A tender image of brightly-hued circles against a grey ground points to the hope being spread by the enormous white round in the foreground. Though the meaning of these paintings will not necessarily be evident to all viewers, nevertheless it can be deeply therapeutic to make them, to find the means to illustrate internal sensations and struggles. The history of art is full of such work, from the Belgian Symbolists to the many forms of Outsider Art, all of it evidence of artworks being created because the artists needed them to be.