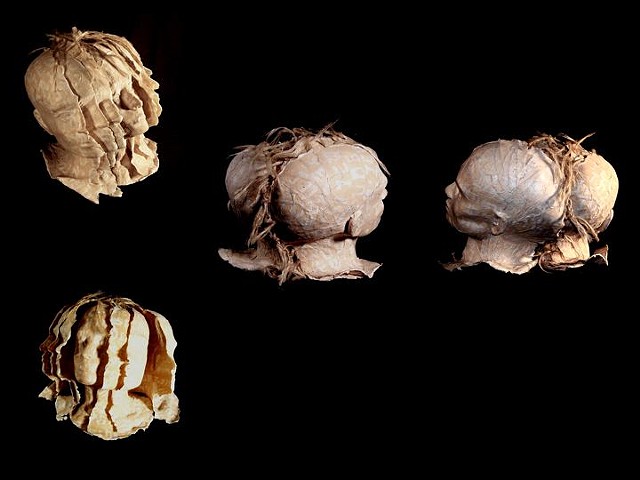 How do you carefully tie up events, when the events in question are those that follow the Holocaust? It is a question posed in a drawing by Karen Baldner, in which a woman and a girl work together at the impossible task of keeping history orderly. Even as they toil, it unravels. Baldner is no newcomer to this state of affairs: she grew up in West Germany, born into a Jewish family who survived the Nazi regime. Nothing is straightforward after that, and the impetus to give shape to its tangles informs many of her artistic productions, foremost among them a series of engrossing and unsettling artist books. The most unexpected of these is “German/Jew” from 2003, a three-dimensional head-shaped book, molded on the artist’s own, in which tufts of blond hair bind together the infinitely split self of that nearly obliterated creature: the titular German Jew. Before Hitler, it was possible for that self to be whole; in wartime, it was continually cleaved, literally and figuratively. The work of those who survived, including Baldner herself, is to figure out if they can put it back together again.