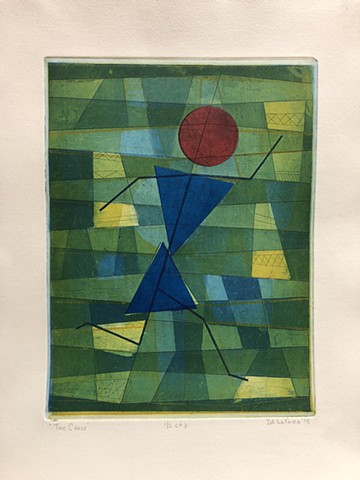 The world around us is constructed primarily of geometric forms. In the room where I type this review, the ceiling tiles are square, the desk rectangular, the pot lights round. As for me, I’m a jumble of lines and spheres and even a few triangles. Artists of all eras have known this, and modern artists like Paul Klee were especially good at illustrating it. Indeed, if Klee had been born in the mid-twentieth century and had had a career as a computer programmer and a sideline as a crafter, he might have created something like Dorothy LaFara’s aquatint, “The Chase.” At its center runs a stick figure, its head a red circle, its body two blue triangles, one inverted atop the other to make a waist. Slightly askew horizontal lines fill the background, irregularly intercut with verticals, the resulting parallelograms colored shades of green and yellow to form a rural landscape of plots that looks not unlike the ones seen on a map. The kicker is the interaction of chaser and world, as the figure’s lines and shapes overlap and intersect with the rest, much as we ourselves do (and sometimes don’t) line up with the geometry that surrounds us.