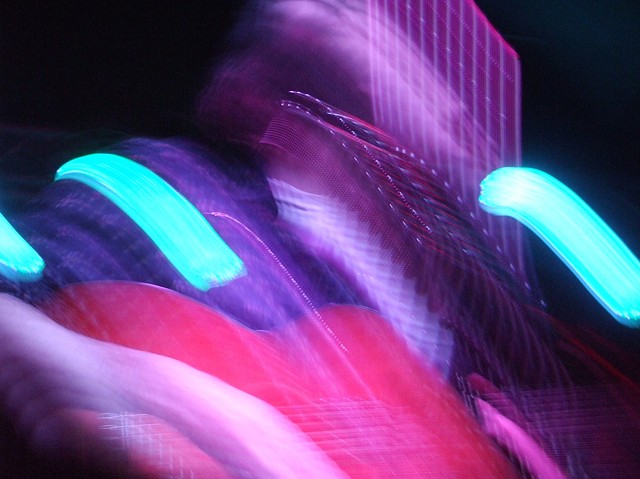 What does music look like? I don’t mean this literally—we all know how instruments and the people who play them and sing over them appear. If the sound and feel of it could be pictured, however, it might resemble something like what JL Baker captures in a series of photos shot between 2007 and 2018, images for which we might invent the term conceptual concert photography. Baker is a fan of alt rock, and he likes to hold a camera up for long exposures whilst moving with the rest of the crowd, often clicking dozens of shots per set. The best of these recall the chronophotography of Etienne-Jules Marey, a Victorian practitioner of early camera techniques whose layered images of horses running and humans fencing later entranced the Surrealists, who were less interested in the physiognomy recorded than in the marvelousness revealed through sparkling traces of light and bizarre overlays of real motion. Something of the contagious verve of live music gets tracked by Baker—especially in those images where the musicians themselves are only just barely defined—but curiously it seems to correspond most to the improvisational phrasing of jazz, with its colored trills of light moving up and down and around, one musician playing off another, a jam for all the senses.