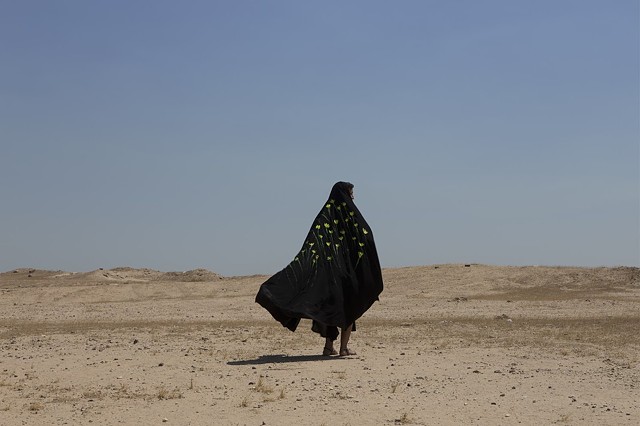 Landscape has long been considered a genre of art making separate from others—portraiture, history, the nude. Not so in the performances, videos and installations of Farah Salem, where landscape is revealed in all of its intricate connections. “Mirage” emulates the Kuwaiti children’s game “Bar/Bahar,” in which players shift their body position based on which word is called out—bar means desert, bahar means sea—only here it is Salem’s body that is being transformed, and with the added elements of actual sand and water, ceremoniously poured into her voluminous skirts by the audience. In “Caustic,” Salem wanders the Arizona scrublands in a black abaya, then uses a bucket of bleach to transform it into something more at one with the dusty hills. The five painted abayas she and other performers wear in “Disclosed” have been transformed to better match their environments, too: a ship for the ocean, fronds for a palm grove, small yellow flowers for the desert. The body—the female body, at least—and its surroundings are one.