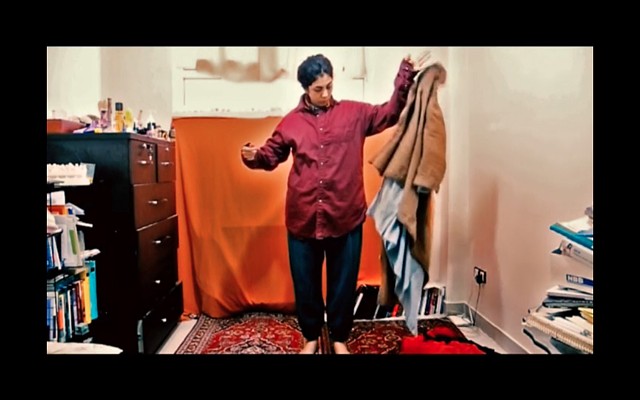 I can’t watch Pegah Pasalar’s short film, “Saturday.” I mean, I watched it, but it hurt too much. A family goes to the beach, one of their small children drowns, and since the film is finely shot, the tragedy is unbearable. I don’t think this is only because I have small children, or because I know someone whose young child died in a pool, but perhaps it is. Pasalar’s equally well-made “Phenomenology,” in which a young woman (the artist) dresses herself in a roomful of clothes, starting with a dozen panties and bras, moving on through pants and shirts, all the way to a long, black abaya, entrances with its cinematic cleverness. Because the film was actually shot in reverse, as an undressing, the clothes fly magically up to her body, as if she were not just a female done in by the strictures of conservative religious requirements, but a superhero with a secret identity: Clothing Woman! Underneath that abaya and that frown, she hides, unbeknownst to all but always there, ready to save the day. If only she could have saved that little kid.