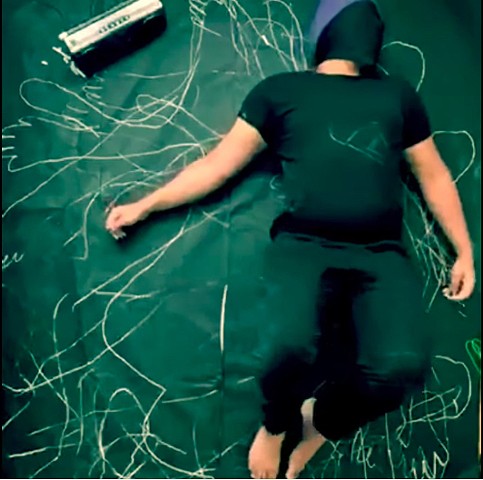 In “I’m The Man That Did Not Get Ahead,” meant to be a live performance but available instead through video, Anthony Sims combines three elements. The most literal are recorded gunshots. The most elegiac is a series of poems by Langston Hughes, played off a tape recorder and including “Let America Be America Again,” from which Sims takes his title and which repeats the crucial observation: America never was America to me. The “me” in Hughes’s case is all those historically oppressed by the American Dream, a dream made unavailable to them through the lash, the laws, the machine, poverty, bigotry, greed. Sims’s third element adds the visuals, as he traces his own body in chalk line after chalk line, an historical accumulation of bodies taken from their rightful owners by those who believe themselves to be the white inheritors of that Dream. Those are the elements Sims put in his performance, but as with all pertinent and powerful art, other elements cannot help but enter. Watching this video today, after weeks of demonstrations against the murder of black people by the police, I hear an echo of protesters’ chants: Stop killing us.